Athlone Barracks, named Victoria Barracks in 1837, was re-named Custume Barracks in 1922 by General Sean MacEoin, independence fighter and first GOC Western Command. Sergeant Custume was a hero of the great siege of Athlone in 1691, sacrificing his life in the defence of the bridge.

In 1698 the Irish parliament decided to build barracks to accommodate the 12,000 British troops in Ireland. Athlone was one of the selected locations. During the great siege the Williamite bombardment had destroyed most of the west town. This cleared the way for the construction, amid the ruins, of limestone infantry and cavalry barracks, stables and a riding house on a site acquired from the earl of Ranelagh. Of these original buildings, all but the infantry barracks are extant, although now converted to different uses. For much of the eighteenth century the barracks, supplemented by the nearby semi-ruinous castle, accommodated a troop of horse and from three to five infantry companies, although for a time in the 1770s the cavalry component rose to five troops and was predominant. A handsome barrack building added at that time is the present officers’ mess. A detachment of artillery was stationed at Athlone from the 1790s. The ordnance presence increased with the construction of nine large permanent batteries on the western perimeter of the town soon after 1800. Rifled steel artillery made the batteries obsolete by the 1860s, when they were finally abandoned.

The expansion of the army during the long war with Revolutionary France of 1793-1815 necessitated major extensions to the barracks, which at that time was the headquarters of the western military district. More land was acquired, on which was constructed the splendid cavalry square, a powder magazine, hospital and artillery gun sheds. After 1815 Athlone was predominantly an infantry barracks with single battalions –sometimes Irish – of the British army in garrison for a year or two before moving on to a new posting, an arrangement that continued up to World War I.

A new riverside road to accommodate travellers to the Midland Great Western Railway Station resulted in the walling of the barracks and the building of a handsome classical water gate with an adjacent quay. Around the same time the existing main barracks entrance on the Market Square was rebuilt and fortified by the addition of a capponière. Other additions to the barracks prior to 1921, such as such as messes, cookhouses, school house, chapel, ball alley, reading rooms, married quarters and gymnasium, were mainly facilities to improve the lot of the soldiers as part of the reforms that followed the shortcomings exposed by the Crimean War. The army recruited successfully in Athlone during the nineteenth century, and officers and other ranks were involved in the social and sporting life in the locality. During World War I the barracks was an important depot for the training and dispatch of soldiers to the Western Front. Extra accommodation in tents was provided in the nearby Ranelagh playing fields. In the War of Independence the barracks was the headquarters of the 5th Division’s Athlone Brigade area, responsible for security throughout much of the west and midlands. 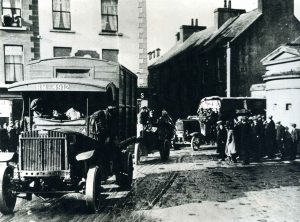 The British army leaving Custume Barracks, Athlone, in 1922. The photo was taken from an original album once owned by Sean MacEoin. Thanks to Gearoid O’Brien for information on the photo, which is now stored in the Aidan Heavey Public Library, Athlone.

After the Anglo-Irish treaty of 1922 the barracks was vacated by the British army and taken over in a peaceful ceremony by the new Irish army under General MacEoin. In the ensuing Civil War it was the administrative and support centre for operations against anti-treaty forces in the west of Ireland. The post-Civil War downsizing of the army was a low point for Custume Barracks. The number of serving personnel was reduced, and the administration of the Western Command transferred to the Curragh. Barrack property was given as sites for SS Peter and Paul’s Church and new government buildings on Barrack Street. These developments necessitated the opening of a new main entrance on Grace Road, flanked by recesses formed from the stones of the divided capponière. Although the Western Command was restored in 1934 to cater for the new Volunteer force, regular strengths remained depleted until the Emergency during World War II. The mobilisation of reserves and a national recruiting campaign rapidly expanded the Defence Forces. All existing space in Custume Barracks was soon utilised, and twenty-four wooden huts were erected to provide additional accommodation. The barracks prison was the main detention centre for apprehended German spies.

The army again contracted in 1945. Its role for the next decade was confined to ceremonial and welfare duties, such as rescuing victims of the great Shannon floods of 1954. Irish membership of the United Nations gave the Defence Forces the opportunity to contribute a battalion to the international force sent to establish order in the former Belgian Congo. The Western Command provided 150 personnel to the original force. Since then virtually all personnel have served on UN missions overseas, many on numerous tours. In recent years the Western Command has evolved into the 4th Western Brigade. Athlone is the location of the brigade headquarters and is also home to the 6th Infantry Battalion and various specialist units. Post-war additions to the stock of barrack buildings include a new magazine, gymnasium, accommodation bloc and dining hall.

Athlone is the archetypal Irish military town. The barracks is large and prominently located, with an impressive and historic suite of buildings. Men and women in uniform are a common sight. Locally the army is respected, popular and regarded as an attractive career choice. Soldiers, serving and retired, are prominent in every sector of community life to which they make an invaluable contribution.