The Society holds regular events devoted to a wide range of topics. Details of our most recent conferences, and future conferences, can be found below:

April 2016 – ‘Paths to Freedom: Athlone and the Easter Rising’ 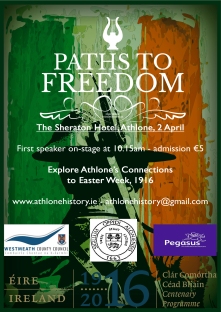 The Society’s latest conference explores the events of Easter 1916 from both a local and national perspective.

On Saturday 2 April 2016, The Old Athlone Society will host ‘Paths to Freedom’, a day of talks that will explore the history of the Easter Rising from both a national and local perspective. The event, to be held in the Sheraton Hotel, is part of Westmeath County Council’s 1916-2016 programme of events.

The Schedule is detailed below:

In November 2015, The Old Athlone Society held a conference to celebrate its fiftieth anniversary, which examined the history and archaeology of Athlone and surrounding regions.

The topics discussed and the speakers included:

Afterwards, there was a reception and a fiftieth anniversary dinner in the Officers’ Mess, Custume Barracks. The Society plans to produce an edition of the journal devoted to the conference proceedings and the town’s history. 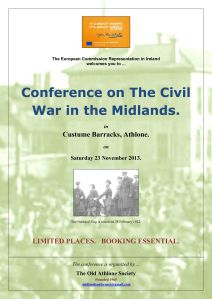 On 23 November 2013 Custume Barracks, Athlone, hosted The Old Athlone Society’s conference on ‘The Civil War in the Midlands’. This conference, which was sold out, was a pioneering effort to make this still controversial topic more accessible to the Irish public. The conference received contributions from historians based in Ireland, the United Kingdom, and Canada.

A special edition of the journal based on this conference was published by the society in winter 2015, and can be found on our publications page.

November 2011 – ‘The Irish War of Independence in the Midlands’

The Chapmans, owners of the Westmeath Independent, played an important role in Westmeath during the War of Independence (Aidan Heavey Public Library)

The society published a special journal related to the conference in October 2013, more details of which can be found on our publications page.