Posted on February 27, 2016 by athlonehistory 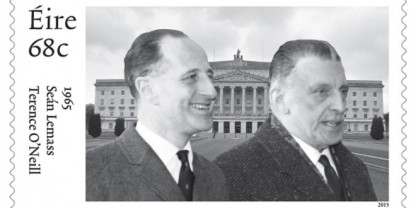 In 2015, An Post released a stamp commemorating the meeting in 1965 between Sean Lemass and Terence O’Neill

Summary – This presentation focuses on the ideological evolution of the Fianna Fáil party from its origins in the 1920s until the 1970s, when the conflagration in Northern Ireland was at its most intense. The early development of Fianna Fáil is assessed, as is the struggle between its ideology and its organization, as well as the party’s evolving attitudes towards the Northern Ireland question and the IRA. Much of the presentation will be devoted to examining Fianna Fáil’s approach to achieving the primary purpose for which it was established, the unification of Ireland.

This talk will put Fianna Fáil’s political odyssey in a comparative and theoretical context. It will argue that radical parties, if they endure and prosper, generally undergo a process of goal displacement whereby the organization reverses its priorities so that the means (gaining power) becomes the goal and the ideological goals becomes a means of cementing party loyalty and winning power. In the case of Fianna Fáil, this divergence between stated purpose and actual political priorities crystallised when the Stormont regime in Northern Ireland came under sustained pressure and ultimately collapsed.

Speaker – Donnacha Ó Beacháin is a Director of Research at the School of Law and Government, Dublin City University (DCU). He is a lead researcher in the €3.6 million FP7/Marie Curie Initial Training Network in Post-Soviet Tensions (2013-2017). He is also lead researcher and project coordinator in the €3.8 million Horizon2020 project on the Caspian region, which involves 19 partner institutions. During 2011-12 he was awarded a major grant by Ireland’s Department of Foreign Affairs Conflict Resolution Unit to lead a research team to examine the role of the OSCE and EU in the post-Soviet “frozen conflicts”. The project was designed to assist the Irish Government as it chaired the OSCE in 2012 and hosted the EU Presidency in 2013. In January 2012 Dr Ó Beacháin also received an additional commission from the IRCHSS/Department of Foreign Affairs to conduct field research in Abkhazia and Transnistria and write two reports evaluating electoral politics in these unrecognised states. Dr Ó Beacháin held a three year (2008-11) Marie Curie Fellowship awarded by the European Commission to conduct research on the post-Soviet colour revolution phenomenon. Previously, between 2000 and 2005, Dr. Ó Beacháin held visiting fellowships in Georgia, Uzbekistan and Kazakhstan.

Recent and forthcoming books include The Colour Revolutions in the Former Soviet Republics: Successes and Failures (with Abel Polese, Routledge, 2010), Destiny of the Soldiers: Fianna Fáil, Irish Republicanism and the IRA 1926-1973, (Gill and Macmillan, 2010), Life in Post-Communist Eastern Europe after EU Membership (with Vera Sheridan and Sabina Stan, Routledge, 2012), Political Communication in Ireland (with Mark O’Brien, Liverpool University Press 2014) and The Irish Government and the Northern Ireland Conflict: The Politics of Partition (Manchester University Press, forthcoming).