Douglas Hyde and the making of the Irish Presidency

Posted on January 9, 2018 by athlonehistory 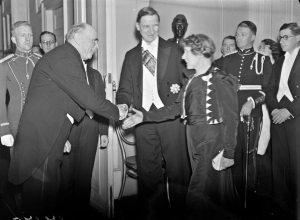 Summary – Eighty years ago, Douglas Hyde was elected unopposed as Ireland’s first President. He served a full seven year term and retired from office in 1945. As President, Hyde had a considerable impact on the development and public perception of the Irish presidency. But how did a retired academic come to serve in this position?

It has long been widely accepted that Hyde’s transition to the presidency was a seamless process that was pre-ordained from the moment the office was conceptualised in the 1937 constitution. Instead, Brian Murphy will discuss how Hyde’s presidency happened only because of last-minute political compromises in an Ireland still divided by the legacy of the Civil War. In 2018, Ireland faces the prospect of its latest presidential election and Brian Murphy’s timely lecture will trace the twists and turns that, in 1938, propelled Douglas Hyde into Áras an Uachtaráin. His lecture will also explain how Hyde played a formative role in the development of the office.

Speaker Dr Brian Murphy lectures in Communications at the Dublin Institute of Technology. He holds a PhD in Modern Irish History from the School of History and Archives, University College Dublin. Brian’s monograph on Douglas Hyde and the genesis of the Irish Presidency was published in 2016 by the Collins Press. He previously co-edited Brian Lenihan: In Calm and Crisis, the bestselling book on the public career of the former Minister for Finance. Brian was a speechwriter to two Taoisigh and his research interests are in the fields of Irish and American history, political science and political communications. He has been published in a number of peer reviewed journals and he is also a contributor to the Dictionary of Irish Biography, a collaborative project between Cambridge University Press and the Royal Irish Academy.