The Billy English Memorial Lecture, 2019 – ‘Unlocking the Myths of the 1970 Arms Crisis’ 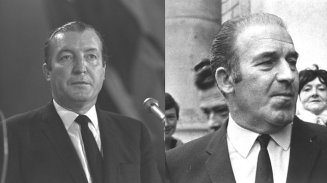 Charles Haughey and Neil Blaney in 1970 (photograph from RTÉ Archives)

Summary The lecture will explain how new research on the 1970 Arms Crisis challenges the conventional view of events in 1969-70. In a revisionist approach, it will suggest that the roles played by Jack Lynch and Charles Haughey, in particular, have been poorly understood in the literature and often misrepresented. It will indicate how freshly discovered documentation supports an alternative take on both the general Arms Crisis and the arms trials. It will consider whether Jack Lynch was an innocent victim or a culprit in 1970 and will also consider why the evidence supports the theory that the arms trials should never have taken place as they did, if at all.

Speaker A former investigative journalist and television producer with RTÉ, Michael Heney recently completed a Ph.D. programme at University College Dublin under the supervision of Diarmaid Ferriter, Professor of Modern Irish History. His thesis is entitled ‘Unresolved Aspects of the 1970 Arms Crisis: Revisiting the Roles Played by Jack Lynch, Charles Haughey and James Gibbons’. It was preceded in 2014 by a Masters dissertation, ‘Colonel Michael Hefferon and the 1970 Arms Crisis’, also under Professor Ferriter. A book based on his research – described by those familiar with it as ‘ground-breaking and important’ – is due to be published, probably next Spring to coincide with the 50th anniversary of the Arms Crisis, under the title: ‘Arms Crisis: Unlocking the Myths of 1970’.

Michael, while with RTÉ Television, produced and presented two Prime Time documentaries on the Arms Crisis: ‘Evidence of the Colonel’; and ‘Secret Orders’ based on the State Papers for 1970, which were released in January 2001 to the National Archives. Earlier in his career, he worked for the Irish Times (1967-72), where he wrote mainly on education, and for RTÉ Radio (1972-77) as presenter of ‘The News at 1.30’, ‘This Week’  and ‘World Report’. His work for television from 1977 to 2010 involved a number of award-winning investigations for ‘Today Tonight’, ‘Wednesday Report’ ‘Tuesday File’ and ‘Prime Time Investigates’.

This entry was posted in Lectures and tagged Arms Crisis, History, Ireland, Modern History. Bookmark the permalink.
%d bloggers like this: