The Late Prehistoric royal site of Rathcroghan – a centre of cult, kingship and cosmos

Posted on December 1, 2019 by athlonehistory

Wednesday, 4 December, at 8.15pm in the Sheraton Hotel, Athlone

Summary Rathcroghan, ancient Crúachu, like the other ‘royal’ sites, features prominently in the literary imagination of early medieval Ireland. These places are presented as royal strongholds, distinguished cemeteries, and the backdrop for great tribal assemblies; a fading memory of the heroic pagan past, which had long been abandoned as Christianity triumphed. 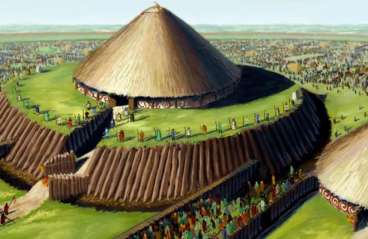 Rathcroghan is one of the major royal sites of Ireland and is known as a place of burial and ritual gatherings. The legendary leader and Warrior Queen of Connacht, Medb, is said to have had her palace here (The Irish Times).

The archaeological evidence, however, suggests a more nuanced picture. Is this a pagan world that had been deliberately obscured in the glare, rather than eclipsed by the light, of Christianity? This talk will describe the importance of Rathcroghan, both in the region and nationally.

Speaker Joe Fenwick is the Archaeological Field Officer in the School of Geography, Archaeology and Irish Studies, NUI Galway. In addition to work at Brú na Bóinne, he has a long-standing and active research interest in the late prehistoric ‘royal’ sites of Rathcroghan, Co. Roscommon and Tara, Co. Meath, about which he has published widely.

This entry was posted in Lectures and tagged ancient, Archaeology, Ireland, prehistory, Rathcroghan. Bookmark the permalink.
%d bloggers like this: