Posted on January 14, 2020 by athlonehistory

Wednesday, 15 January, at 8.15pm in the Officers’ Mess, Custume Barracks 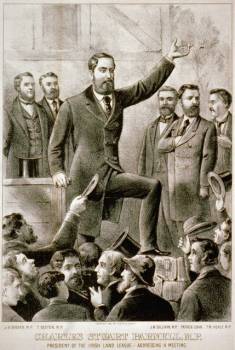 Summary Under the leadership of Charles Stewart Parnell, the Irish Parliamentary Party achieved unprecedented success in the mid-1880’s. The Party held the balance of power at Westminster. For the first time, Ireland was projected into the forefront of British politics. But, in the eyes of Conservatives, and others, Parnell’s Home Rule policy posed a threat to the integrity of the United Kingdom. Ultimately, that threat was not only to the United Kingdom, but the integrity of the entire British empire.

From 1885 onwards, a number of individuals and groups came together determined to destroy Parnell, and to reduce the influence of his Party. This culminated in the publication in the Times Newspaper in 1887 of a series entitled “Parnellism and Crime”. Among other things, the articles purported to contain details of letters said to have been written by Parnell expressing support for agrarian violence and crime, and the Invincibles, who, in 1882, had assassinated Lord Frederick Cavendish, the new Chief Secretary for Ireland, and Thomas Henry Burke, the Permanent Under-Secretary, the most senior Irish civil servant in Dublin Castle. As is well known, the letters were shown in the subsequent Parnell Commission to have been forged by Richard Pigott.

The talk focuses on some of the remarkable historical background to the Commission. In particular, it explores the role of two former adversaries, Michael Davitt, the leader of the Land League, and Edward George Jenkinson, the former Under-Secretary for Police & Crime in Dublin Castle, known as “The British Spy Master”. The talk will seek to describe the extent to which the Fenian movement had been penetrated by British informers and intelligence agents, and considers a tacit agreement made between Parnell and his co-accused, including Davitt, on the one hand, and the British Liberal Party administrators, who had held power in Dublin Castle during the Land League campaign from 1881 up to 1885. The paper will also discuss the remarkable role played by the British Conservative government under Lord Salisbury in backing up the Times Newspaper in his campaign against Parnell.

Speaker John MacMenamin is a judge of the Supreme Court of Ireland. He was born in 1952, and educated in Terenure College and U.C.D., where he studied history prior to qualifying as a barrister. He has a particular interest in modern Irish history. He commenced practising as a barrister in 1975, and became a senior counsel in 1991. He was Chairman of the Bar Council from 1997 to 1999. He was appointed to the High Court in 2004, and to his present position in 2012. During his career as a judge, he delivered a number of judgments relating to children at high risk, and disabled people. He is married to Lia O’Hegarty, and they have one child, now aged ten.